Major plans for A511 under discussion 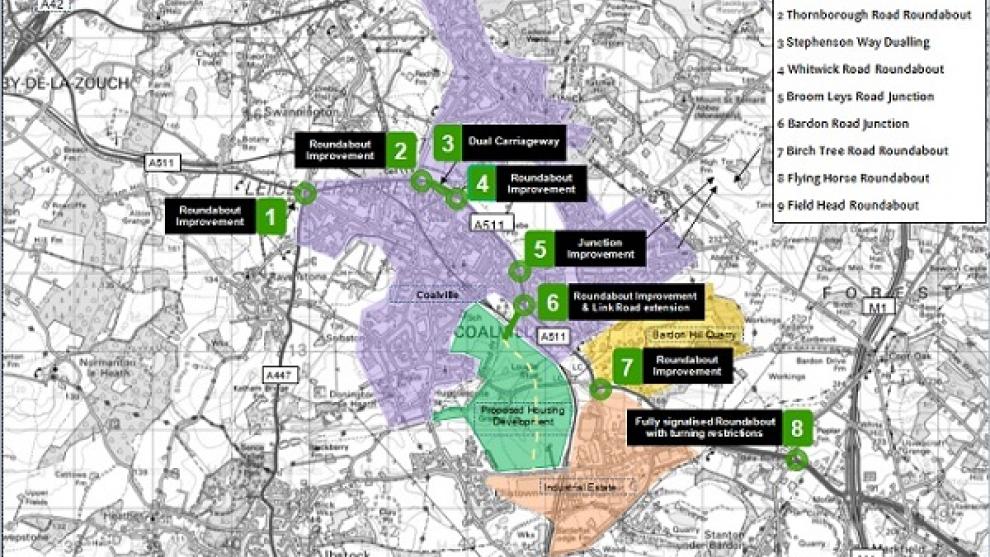 Major plans to develop junction and road improvement schemes through a £49m programme of work between Ashby and Coalville will be discussed by the county council next week (23 March).

The county council’s A511 Growth Corridor is one of seven schemes – and the only one in the East Midlands – being put forward to a £3.5 billion Major Roads Network  (MRN) ‘pot’ by Midlands Connect.

The scheme proposes improvements to eight junctions along the A511, including a new link road off Bardon Road and a dual carriageway between Thornborough Road and Whitwick Road.

The council is anticipating a Department of Transport (DfT) decision on the funding bid in the next few months.

We’re hopeful of a positive outcome on the funding bid, but it’s vital that we prepare the scheme so it’s shovel-ready.

Leicestershire is growing – and we’re building strong communities, creating jobs and boosting skills, but we also need the right infrastructure in place to manage that growth.

We’re very aware that the A511 has suffered from congestion for many years and tackling it with this scheme will also have benefits environmentally in leading to a reduction in exhaust emissions.

It will also provide the opportunity, as part of a wider transport strategy for Coalville, to address public transport improvements and promote walking and cycling initiatives. That also contributes to the council’s commitment to tackling climate change

For the £49m project, Midlands Connect is bidding, on Leicestershire’s behalf, for around £42m from the MRN fund.

The remainder will come from around £7m worth of developer contributions as part of a funding strategy developed with North West Leicestershire District Council, which is working closely with the county council on a joint goal of delivering growth in the area.

The collaborative approach between the two authorities was also evident in the successful delivery of the M1 junction 22/A42 junction 13 improvement scheme.

"It’s a good example of collaboration between the local planning authorities as it's very important to have the right infrastructure in place - such as improving the road network - to support growth, build sustainable communities as well as taking measures to reduce congestion and improve air quality.”

As part of the progress update to Cabinet members, they will also be asked to approve a consultation so that residents and other interested parties can have their say on the proposal to create the link road from the Bardon Road roundabout to housing developments off Grange Road.

Those plans are also subject to a planning application which will only be submitted if the bid is successful.

Around £4m has also been set aside by the council to complete detailed designs of the scheme, develop and submit the application and make other necessary preparations to progress the scheme, with support from the Leicester and Leicestershire Enterprise Partnership (LLEP) and Midlands Connect.

The LLEP had also previously supported work on the J22 M1 / J13 A42 scheme with £4.6m from the Local Growth Fund, a pot of government funding awarded to the organisation for projects which benefit the local area and economy.

The A511 proposals will be discussed by Cabinet on Tuesday, 23 March at 2pm, the meeting can be viewed at www.leicestershire.gov.uk/webcast

An awards event to recognise professionals across the care industry is being held.