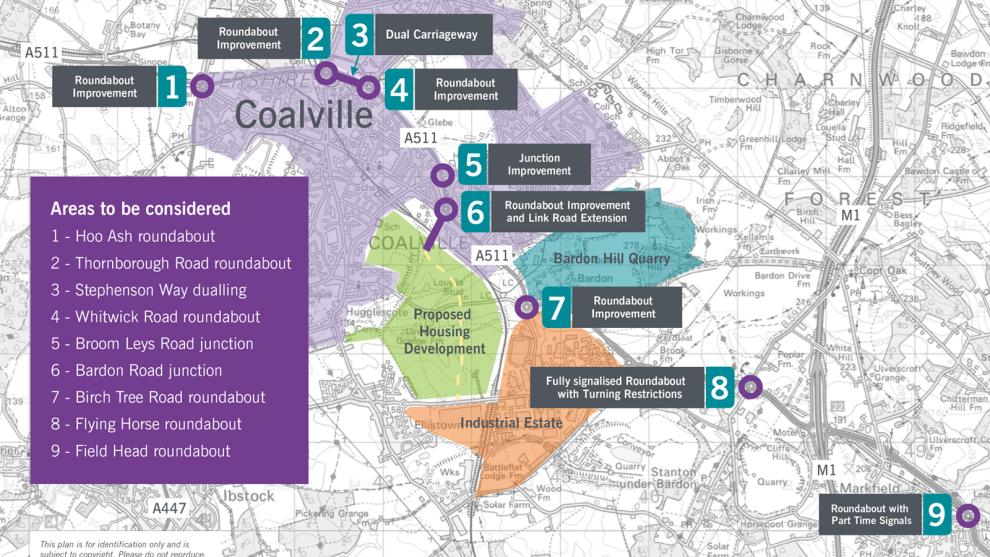 Councillors have today (Thurs, 12th) approved the latest stage in the county council’s quest to deliver congestion-busting measures on a stretch of the A511 between Ashby and Coalville.

The A511 Coalville Growth Corridor scheme will see major improvements to eight junctions along the A511 and a dual carriageway between Thornborough Road and Whitwick Road.

Integral to the whole plan is the construction of a link road off the Bardon Road roundabout to connect with housing developments off Grange Road.

The planning application relating to the link road proposals was approved by members of the county council’s Development Control and Regulatory Board.

Gaining planning permission for the link road is a small, but nonetheless, significant step in the progress of the scheme.

The A511 has suffered from congestion for many years and this scheme will not only improve traffic flow, but provide us with the opportunity to improve public transport and promote walking and cycling initiatives.

For example, the link road will include lit footpaths and cycle paths, meaning that local residents can be less reliant on their cars when travelling between the new housing developments and Coalville town centre.
Person:Councillor Ozzy O'Shea, cabinet member for highways and transport

The road will also provide better access to around 3,500 new homes off Grange Road for which developers have been granted planning permission.

The public right of way on the land would also be re-routed to line up with the road, and a crossing provided for pedestrians.

In addition, there will be an 18-tonne weight limit to restrict heavy vehicles from using the route and proposals to implement a 30mph speed limit.

Mr O’Shea added: “We wanted to ensure that we fully took into account the views of residents and businesses so we also consulted on the link road proposals last year.”

In 2021, the Government approved the county council’s initial plans for the Growth Corridor scheme and awarded £40m to the scheme with around £7m coming from developer contributions as part of a funding strategy developed with North West Leicestershire District Council.

This strategy has also identified approximately £23m of additional developer contributions which would be used to support the scheme, particularly in the light of rising costs, much of it around materials.

The full business case for the A511 scheme is also due to be submitted to Government for final approval in advance of works starting.   Work on the scheme is scheduled to start in Summer 2024.