Last year, more than 30 buildings across the city and county joined with Leicestershire County Council in lighting up 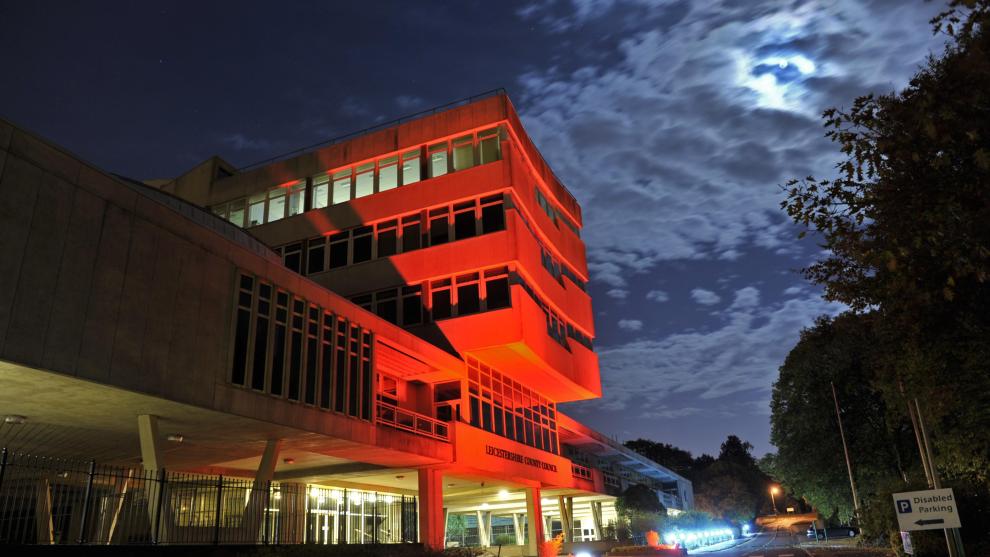 The County Hall headquarters of Leicestershire County Council is once more being lit up in red in support of the Royal British Legion’s Poppy Appeal 2022 – with the Lord-Lieutenant of Leicestershire calling on organisations across the county to light up their own buildings in tribute.

Last year, more than 30 buildings across the city and county joined with Leicestershire County Council to light up their buildings. It is hoped that this year, even more organisations will pledge to illuminate in red each night until Remembrance Sunday on 13 November.

Once again this year, we are calling on organisations across the city and county to light up their buildings in red as an eye-catching way to honour those who gave their lives in conflict.
I hope that by illuminating some of our buildings in this way, it will provide a simple but powerful expression of our community’s support for the Poppy Appeal.

A service to mark Armistice and to pay tribute to all those who lost their lives in conflict is being held at County Hall on Friday, 11 November.

The short service will take place at the Stand Easy memorial, beginning at 10.55am, and will incorporate the laying of wreaths and a two-minute silence at 11am.

They will be joined by representatives of the Royal British Legion, serving members of the armed forces and cadets, as well as 30 pupils from the Hall Primary School in Glenfield.

Applications for autumn 2023 intake need to be made by Sunday, January 15

The awards celebrate the very best examples of effort and achievement