The Lord-Lieutenant is non-political. He promotes working together across voluntary services, business and cultural life.

The main duties are to: 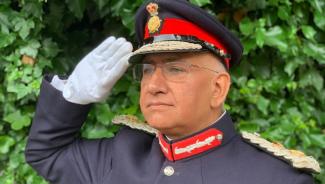 Mike Kapur, as Lord-Lieutenant, is the official representative of His Majesty The King for the County and City of Leicester, and was appointed on 14 June 2018. He is a leading businessman who takes a keen and active role in developing and promoting the City and County he made his home 40 years ago. He has 28 successful years of Board Room experience in both private and public sector organisations.

Having graduated from the then Leicester Polytechnic, Mike started his executive career in 1985 at KPMG and in May 1993 he was named the East Midlands Young Project Manager of the Year by the Institute of Management. He was appointed Director of Entrepreneurial Service at Ernst & Young in 1996 before moving to Parker Plant Limited as Group Finance Director.

In 2002 Mike founded Signum Corporate Communications Ltd where he still retains responsibility for ensuring that all aspects of company strategy are implemented and performance managed.

In 2009 he was appointed Chairman of National Space Centre as well as joining the Board of De Montfort University, becoming Deputy Chairman and Pro Chancellor in 2012.

His qualities as a business leader were recognised by the Confederation of British Industry in 2013 when he was appointed to lead the CBI’s policy work in respect of SME’s and act as the National figurehead for SME members and their issues including interfacing with Government and the European Commission on their behalf.

In 2014 Mike was named Non-Executive Director of The Year and in 2016 he became Chair of Trustees of Leicester City Football Club Trust.

Mike has always been a strong advocate of public service and is a Trustee of Warning Zone and National Forest Company. Formerly he was a Governor of Derby College Group and a Trustee of National Learning and Work Institute.

Inviting the Lord-Lieutenant to your event

Please consider our guidance for event organisers hosting the Lord-Lieutenant when you are thinking of inviting him to an event:

If you would like to invite the Lord-Lieutenant to an event, please download and complete our Engagement Form, and return this to Lieutenancyoffice@leics.gov.uk

The Vice Lord-Lieutenant and Deputy Lieutenants

The High Sheriff of Leicestershire

The office of High Sheriff of Leicestershire is also a royal appointment, with a particular link to the judiciary, law and order, but is separate from and should not be confused with the Lord-Lieutenant.

Take a tour of the photo gallery Opens new window